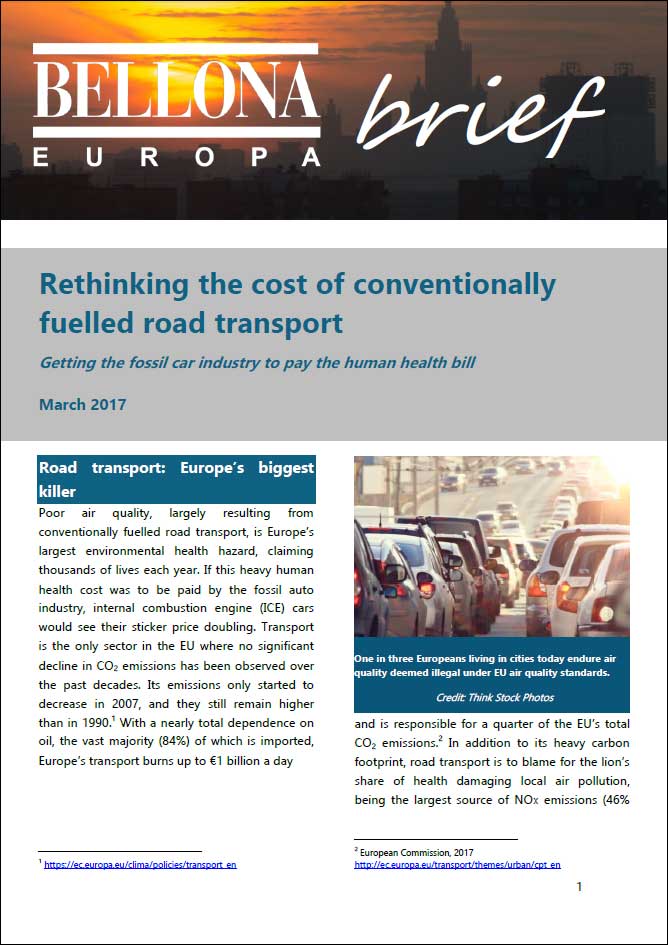 Poor air quality, largely resulting from conventionally fueled road transport, is Europe’s largest environmental health hazard, claiming thousands of lives each year. In its newly launched policy brief, Bellona explores the heavy yet unaccounted for human health costs from the fossil car industry and estimates that if these were to be paid by car makers themselves, we would see a doubling in ICE cars price tags. Our conclusions are simple: electro-mobility is the only viable cost-effective approach to drastically reducing damaging air pollution while safeguarding human health.

Poor air quality has been identified by the European Environmental Agency as the single largest environmental health hazard on the continent, resulting in a lower quality of life due to illnesses and an estimated of 467,000 premature deaths per year.

Road transport is to blame for the lion’s share of health damaging local air pollution, being the largest source of NOx emissions (46% of total EU emissions) as well as particulate matter (PM)[1]. In an attempt to modestly reduce earth warming-CO2 emissions, a switch from petrol to diesel was heavily promoted EU-wide back in the 1990s. Over twenty years later, in the wake of the Dieselgate scandal, overwhelming evidence has piled up revealing another not so bright side to diesels: namely their tremendous direct impact on human health through local air pollution. While diesel cars can produce 15% less CO2 than petrol cars, they emit four times more nitrogen dioxide (NO2) and 22 times more particulates.

Systematic fraudulent emission testing practices have helped car makers achieve significant profit, amounting to roughly €7 billion[2], from cheating their way into compliance with EU regulations. The bill has instead been paid by society – in the form of deadly air pollution levels and reduced quality and length of European lives. In fact, in 23 out of 28 EU Member States air quality standards are still exceeded[3].

So what would conventional vehicles’ price tags look like if they were to truly reflect their exhaust emissions-related human health costs?

Bellona’s brief attempts to provide an answer to this question: Given there are currently 253 million ICE cars on European roads[4], and taking into account the fossil car industry’s total annual human health-related economic burden of roughly €600 billion[5], each EU-based ICE car would have to pay back €2,371 per year to correctly compensate the public, and truly reflect its footprint on human health. These unaccounted for human health costs of an ICE car would amount to roughly €23,715 during its lifetime[6]. If these external costs were to be taken into account this would result in the doubling of ICE cars sticker price to €50,150. The unaffordable personal and economic cost of air pollution underscores the need for strong policy action on EU and national levels. Investing in electro-mobility, marked by greater efficiency and a positive contribution to tackling air pollution would therefore result in substantial health and monetary gains.

Learning from the country where EVs roam free

We take a closer look at Norway: the country with the highest penetration of EVs per capita, where EVs account for roughly 16% of new car sales. Like the majority of European cities, however, Oslo has also suffered poor air quality problems arising from its still predominantly diesel-powered vehicle fleet.

In response to recent spikes in poor air quality, the city council has moved to ban diesel cars, and a complete phase out of all fossil cars is planned by 2025. NO2 emissions, mainly from transport, have been a major contributor to the 185 premature deaths claimed by air pollution in the Norwegian capital each year. The total economic cost of the premature deaths from air pollution incurred by Norway in 2010 is estimated at €807 million[7]. By comparison, the yearly government spending on EV incentives (direct and indirect) for the whole country has been between €400 and 500 million, roughly half of the estimated yearly human health cost from air pollution.

Enabling the EV revolution in Norway has thus been a cost-effective means to saving human lives and the environment. Today’s fossil car industry-induced air quality and human health crisis should serve as a wakeup call to accelerating this inevitable transition.

The key to effectively internalising the fossil auto industry’s costs lies in the signals provided to consumers when prices reflect true costs. Providing transport users with correct price signals would help in initiating efficient behaviour and help to foster the uptake of electric mobility. As a first step, reflecting ICE cars’ heavy human health cost in their purchase price would enable consumers and car manufacturers to make informed purchase and investment decisions.

[5] This is a mid-estimate based on figures from European Commission Staff Working Document (2013), Impact Assessment – Accompanying the Communication from the EC to the Council, EP, EESC and CoR  – a Clean Air Programme

[6] Taking into account the average age of an ICE car in the EU is 9.73 years

[7] Economic cost of the health impact of air pollution in Europe, WHO and OECD (2015)