How to go carbon negative 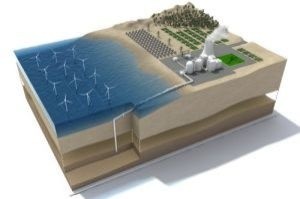 By combining technology for CO2 capture and storage (CCS) with the use of biomass, future energy production can remove CO2 from the atmosphere. The latest observations of climate change tell us that carbon negative is not only an interesting idea, but a necessity if we are to avoid crossing dangerous climatic tipping point.

This article has also been published at the Cop15 Climate Thinkers Blog.

This spring, Dr. James Hansen, head of the NASA Goddard Institute for Space Studies, visited several European capitals. Along with leading climatologists, Dr. Hansen argues that we are at the danger of crossing tipping points beyond which climate change will become irreversible. To avoid this and preserve a planet similar to that on which civilization developed and to which life on Earth is adapted, Dr. Hansen and colleagues advocate reducing the level of CO2 in the atmosphere from its current 385 ppm to at most 350 ppm.

What if Dr. Hansen and colleagues are right?

If we really are about to cross the “tipping point”, we will need more radical tools than those we considered when negotiating the Kyoto agreement in 1997. We will not only have to reduce future CO2 emissions – we will have to reduce the level of CO2 in the atmosphere. How then, can we achieve net negative emissions while at the same time supplying energy to fuel economic development?

While this prospect might sound more like dreaming, the first carbon negative energy plant will be put in operation in Denmark by the European energy utility Vattenfall by the end of 2013, achieving a net removal of half a million ton of CO2 per year from the atmosphere while supplying energy to 200 000 homes. The enabling technology is a combination of bioenergy and CO2 capture and storage (CCS).

This is one of the reasons why Bellona, as an independent environmental NGO, finds it crucial to include CCS as part of a new climate agreement. Bellona’s message to the negotiators at the ongoing meeting in Bonn is to acknowledge the need for a carbon negative strategy and the need to allow CCS to play the enabling role.

Bellona is a solutions-oriented environmental NGO with a focus on driving the technological change needed to combat global warming. In our 2008 study “The Bellona Scenario: How to combat global warming”, we showed how available and emerging technologies can be combined to reduce global greenhouse gas emissions by 85 percent by 2050. A key finding here is that large-scale deployment of CCS in industry and in combination with bioenergy is a prerequisite to be able to reduce emissions by 85 percent from 2005 to 2050.

In principle, biomass binds carbon dioxide from the atmosphere as it grows. Substituting fossil fuels and feedstocks in transportation, space heating, industry, and power generation with biomass therefore enables you to go carbon neutral. Combining these biomass applications with CCS takes this one step further, creating carbon negative value chains that actually remove CO2 from the atmosphere. This way, CCS is a key enabler of the carbon negative strategy.

Some countries, such as Sweden, have potential to quickly become carbon negative. The CO2 emissions formally reported to the UNFCCC amounts to about 67 million tonnes per year. So when Sweden is to fulfil its ambition to become ‘carbon-neutral’ by 2030, this means cutting the emission of fossil CO2 by 67 million tonnes. Reaching this target will not only be easier when the 23 million tons of biogenic CO2 currently emitted from large pulp-and-paper plants are included; fitting these plants with CCS would even allow a ‘carbon-negative’ Sweden. Now that would send a message.

For the fossil energy industry, the carbon negative strategy is no small opportunity. Coal and gas power plants should be fitted with CCS and converted to run partially or completely on biomass and biogas, in effect becoming carbon negative biomass power plants. The European energy utility Vattenfall is already investing serious money in doing so as a key element in its own ambition go from being Europe’s second largest emitter of CO2 to a carbon neutral company in 2030. Why not go carbon negative in 2050?

But how can we supply the vast amounts of sustainably produced biomass needed to make this happen? And how do we make sure that we reach a sufficiently ambitious deal on climate change in Copenhagen? The carbon negative strategy will fail if it does not answer these two key questions. The strategy must therefore include a scheme for generating jobs and wealth in poorer countries while at the same time supplying large amounts of sustainably produced biomass. How do we do that?

Recent developments suggest that algae could be the “missing link” in the carbon negative strategy. Algae grow faster than any other plant, and can be produced on land not needed or suited for food production. This means that the area needed to grow a certain amount of biomass is much smaller, and that the production does not as easily as other energy crops come in conflict with food production. Algae production technology includes small-scale and large-scale, low-tech and high-tech solutions, and the resulting algal biomass is an energy commodity that is readily transported and that can be used for a range of energy and industry applications across the globe. Again, this might seem far off, but in fact, the algae bioenergy industry is booming, and production facilities of all trades are already in operation across the globe.

What we have, then, is an opportunity to create a global green energy commodity market that offers poorer countries a chance to ensure economic development while at the same time committing to an ambitious deal in Copenhagen. In the carbon negative strategy, saying yes to a sufficiently ambitious climate deal for a developing country leader means saying yes to the economic development opportunity of the century.

In Bellona’s opinion, the carbon negative strategy is not only the opportunity of the century – it is an absolute necessity to be able to stabilize the climate and avoid crossing the point of irreversible climate change. Failing to do so will leave us with no other option than to hope that Dr. Hansen and colleagues are wrong about reaching the tipping point.